As the Earth is heating up due to greenhouse gases emission, being eco-friendly is not just some fancy idea anymore. Although some governments tend to be a bit stubborn about switching from fossil fuels to renewable energy, the rest of the world seems to know what's about to go down.

We could say the same about the broadly defined industry and IT being the more responsible branch. But does it mean it scores 10 out of 10 points for being entirely green? Well, not really. At least not yet.

Looking for new ways to reduce their operating costs, many businesses turned to cloud computing as it’s more cost-efficient than maintaining private IT infrastructure. The growth of the cloud market hasn’t gone unnoticed, though. Recent reports point to the fact that the carbon footprint of the IT sector surpassed that of air travel. And as the global computational needs grow each year, the situation will only deteriorate unless we do something about it. What can we do, however?

The first step is obvious - the industry needs to rely more on renewable energy sources. Major tech companies are aware of this. Google and Microsoft claim their cloud services are already carbon neutral. That means both companies compensate for their carbon emissions through carbon offsetting projects. Still, they aim to run their data centers on green energy only by 2030. Amazon is falling far behind the competition, as it has committed to achieving carbon neutrality by 2040.

The second problem is the industry’s continuously growing appetite for energy. Someone could argue building more and more hydropower plants, wind farms, or photovoltaic power stations is the way to go. Unfortunately, this is not enough to make the problem disappear. There’s only so much space on the surface of the planet, right? We have to think long-term and bring innovation into the equation. A good example is Facebook’s decision to expand its data center in the northern Swedish city of Luleå. A colder climate translates to less energy needed for cooling the hardware.

So you thought coal mining was bad for the environment?

The same creative approach can be applied to blockchain technology. First, let’s peek under the hood of the good old Bitcoin blockchain and its consensus mechanism, Proof-of-Work. In simple terms, Bitcoin blocks are validated by so-called miners who compete in a kind of race to solve a cryptographic puzzle. Whoever has the most powerful hardware, solves the puzzle first and wins the prize (BTC). So the more users compete, the more energy goes into validating a single block. As a result, all this mining consumes more energy than Finland! The thing is, most of this energy is wasted. And if - as some sources estimate - over a million individual users mine every day, quite a lot of energy is going down the drain, isn’t it? And that's not the only problem. The need for processing speed means users have to update their hardware continually to stay in the game. Yes, you already guessed it - this means tons and tons of electronic waste.

The solve this, a different consensus mechanism was introduced. This model, adopted by the Cardano blockchain, is called Proof-of-Stake. To have a shot at validating blocks, users put in bids in the form of cryptocurrency coins. It's called staking. Then, one of these users is chosen to solve the puzzle, and if they succeed, they keep the stake and earn an additional reward. What’s crucial here is the energy needed to validate a block. Compared to Proof-of-Work’s massive consumption, it’s practically negligible. According to Cardano founder Charles Hoskinson, the energy used by Cardano is equal to 0.01% of what Bitcoin consumes. Oh yes, and you don’t need a blazingly fast, power-hungry mining rig to stake your coins.

Cardano is generally considered one of the most environmentally sustainable blockchains, but an energy-efficient protocol is not the only feather in its cap. In late 2021, Cardano Foundation organized the Global Cardano Impact Challenge in cooperation with Veritree. For every ADA donated to Veritree, a tree will be planted in Madagascar (as well as in Kenya and Southeast Asia, if the donation volume is large enough). To express our support for this project, Iagon contributed 10,000 ADA (check also transaction details).

We have donated 10k ADA to support #1MillionTrees. Proof and Nominees coming soon :)

Still, Iagon has much more to offer when it comes to environmental efforts and reducing the cloud’s carbon footprint. .

Demand for cloud computing and storage services increases year by year. The global cloud computing market size is expected to grow to nearly $950 billion by 2026 (almost twice its current value). However, many data centers aren’t used to their full capacity, which means some servers are idle and consume energy for no reason. We perceive this as Iagon’s opportunity to shine. By reclaiming the spare resources, we can help reduce the carbon footprint of cloud storage solutions.

But don’t take our word for it; let the numbers do the talking. Based on our estimates, Iagon could reduce up to 248,433,600 metric tons of CO2 per year. How did we come up with that?

According to the EPA, the U.S. national weighted average CO2 marginal emission rate for delivered electricity is 7.09×10-4 metric tons CO2/kWh.

Although the future may seem a bit dark, it can get brighter if we find a way of dealing with the shadow cast by the cloud. And while the ideas presented in this article won't solve the problem of the industry’s environmental impact, they certainly contribute to achieving the goal. So join our shared storage economy now and help Iagon make the web greener. 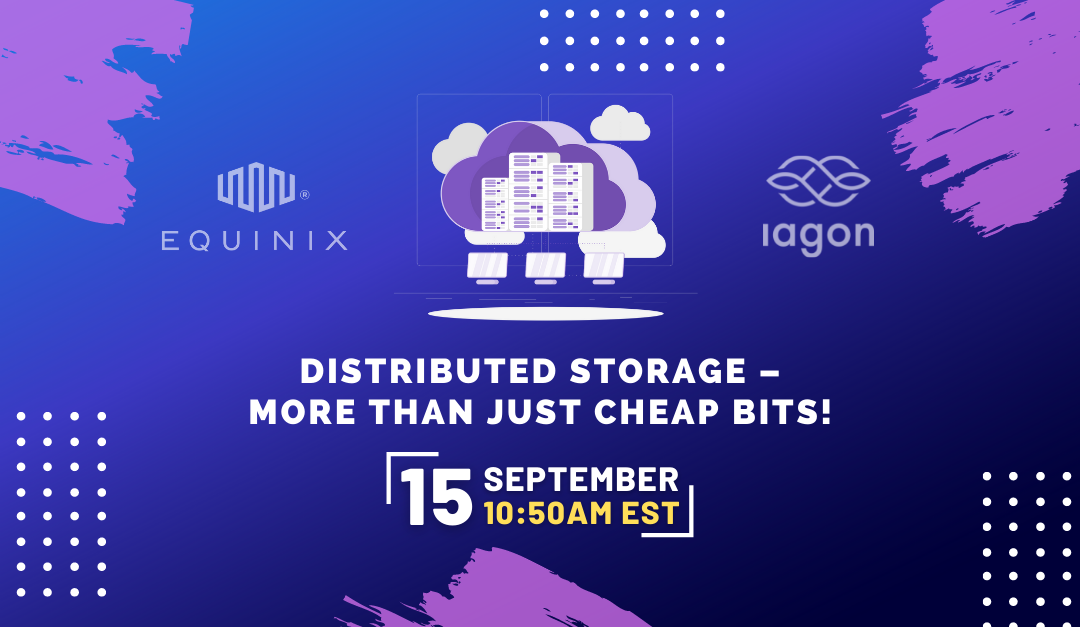